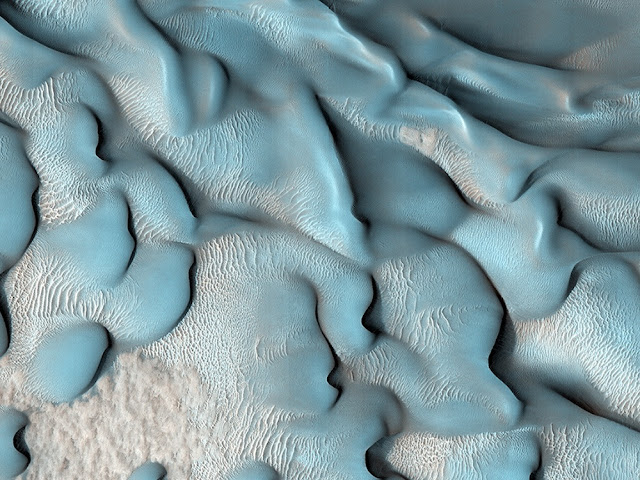 For more detail and to find stunning pictures of space, CLICK HERE.

This image shows a variety of different dune types in southern Lyot Crater in the Northern lowlands at 48.9 degrees north. Transverse dunes to the west grade into longitudinal dunes downwind to the east and barchans to the south, possibly because of local winds channeled by topography in the impact basin. This image was intended to match the approximate illumination and viewing conditions of an earlier HiRISE observation that was made two Martian years earlier, in August 2008. Detailed comparison of the two images shows movement on many of the dunes during this interval of nearly four Earth years.


Posted by Rounder Studio Stuff at 2:35 PM No comments:

In an earlier post, Sacred Things: Robots, I highlighted a video of a DARPA robot that could literally go over hill and dale, take a spill, right itself, and run at a trot.
The purpose of the robot is obvious, to serve as a pack mule. Analysts at war colleges have known since studying the conquests of Alexander that the average fighting man can carry between 40 to 60 pounds, the heavier the less easily, and always as an encumbrance.
The robot's name is LS3, which is an acronym for Legged Squad Support System. To quote ""The vision for LS3 is to combine the capabilities of a pack mule with the intelligence of a trained animal," Army Lt. Col. Joe Hitt, DARPA's LS3 program manager, said in a written statement. Each robot carried a 325-pound load during the demonstration, Hitt told InformationWeek in an email."

I am however mindful of what Alexander did at the outset of when he was leading his army across the Khyber Pass into India, he burnt his wagons, because he realized that the trains were a hindrance.
I am also not sure how I would feel if I saw one of those robots in the real world.
Posted by Rounder Studio Stuff at 9:50 AM No comments:

Posted by Rounder Studio Stuff at 1:38 PM No comments:

DARPA is at it again.

Posted by Rounder Studio Stuff at 3:09 PM No comments:

Screw You People Trying to Find Meaning in This

I know that this will disturb a lot of religious people, but here goes. The surest proof against the existence of god is the suffering of children.

- Fyodor Dostoevsky, The Brothers Karamazov
Posted by Rounder Studio Stuff at 11:36 AM No comments:

The Difference between Google and Microsoft

Could it really be this simple, this cut and dried? Google has hired futurist Ray Kurzweil to assist them in figuring out where to go forward to the future; this will have an impact on networks, engineering, language processing and managing data.  Microsoft, its arch-rival, has hired Mark Penn, former bulldozer on behalf of the Clintons, to do the same bulldozing to Google. Microsoft is looking to achieve stasis, not innovation, defamation. Should be interesting.
Posted by Rounder Studio Stuff at 1:25 PM No comments:

Posted by Rounder Studio Stuff at 2:01 PM No comments: