Image of the Day

Email ThisBlogThis!Share to TwitterShare to FacebookShare to Pinterest
Labels: Image of the Day, moveable GIF 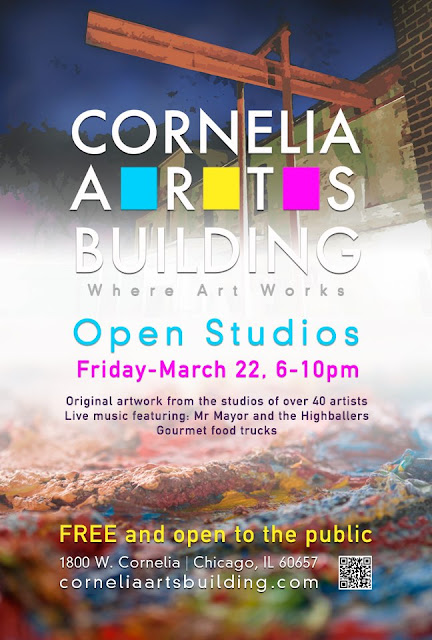 We've got live music and gourmet food trucks, you should come on by.

www.corneliaartsbuilding.com
Posted by Rounder Studio Stuff at 2:22 PM No comments: 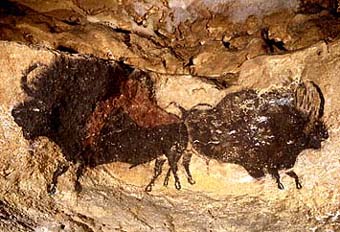 Posted by Rounder Studio Stuff at 12:59 PM No comments:

Today is Nicholas Copernicus' 540th birthday. Let us also remember Aristarchos of Samos who also proposed a sun-centered system based on his observations of the parallax effect.

Illustrations via [http://csep10.phys.utk.edu/astr161/lect/retrograde/copernican.html] which is a nice explanation.

Posted by Rounder Studio Stuff at 7:53 AM No comments: 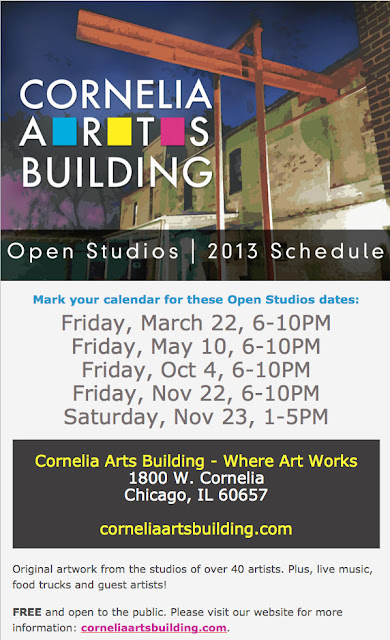 Friday, March 22, 6-10pm, coming sooner than you think! There'll be art and artists. Come on by. We have a website, www.corneliaartsbuilding.com, we're on ArtSlant and you can find us at the Chicago Artists Resource. Seriously, I love to talk to all who visit.

Here's the total summary of what you need to know.

See Original Artwork from over 40 artists in their working artist studios with special guest artists Kass Copeland and Hyeonkyeong Yeo.

FREE and open to the public

Posted by Rounder Studio Stuff at 8:49 AM No comments:

Meteorite over the Urals

Drivers in Russia frequently drive with dashboard cams as protection against insurance fraud; literally Russian pedestrians toss themselves into harms way by jumping onto moving vehicles in order to make a kopeck or two. Robert Krulwich explains that's why we have so many awesome videos of a meteorite streaking across the skies, shattering window glass in Western Siberia, in Chelyabinsk and Yekaterinburg, injuring over 1,000 people on Friday, February 15 at 3:20 GMT.

And before you think it can't happen here, but that these things only land in Siberia, in places like Chelyabinsk or Tunguska [here's NASA's fix on this], think again. Parenthetically, there was no way I was going to do this post without mentioning the Tunguska Event.

On June 30, 1908, in a remote part of Russia, a fireball was seen streaking across the daytime sky. Within moments, something exploded in the atmosphere above Siberia’s Podkamennaya Tunguska River in what is now Krasnoyarsk Krai, Russia.

This event – now widely known as theTunguska event – is believed to have been caused by an incoming meteor or comet, which never actually struck Earth but instead exploded in the atmosphere, causing what is known as an air burst, three to six miles (5–10 kilometers) above Earth’s surface.

There's a lesson here, the earth abides, but it is not a stable platform. There's a huge meteorite crater in Winslow, Arizona.
Posted by Rounder Studio Stuff at 9:49 AM No comments:

Plato Was a Wrestler


The Olympic Committee has voted wrestling off their island. The oldest of all the sports in either the ancient or the modern games is out as of 2020. Here's Forbes' condemnation of this from a business viewpoint.

Plato, the philosopher-wrestler, may not even have been his real name, it means broad-shouldered, could be like The Hulk.
Posted by Rounder Studio Stuff at 11:56 AM No comments:

The Definitive Answer to the Chicken or Egg First Question

Posted by Rounder Studio Stuff at 11:20 AM No comments:

The Dot and the Line

Almost all of my art production has drawing in it. I define drawing as making a mark with an instrument that is held directly in the hand that mars, scars, adds or subtracts from a substrate. I see the difference between painting and drawing as a simple one, painting is almost always completely additive. When an artist decides to change something, simple, simply paint over it. This sets up a continuum at one end of which is drawing. It is frequently about interaction with the substrate, as you can see in my drawing above, black sized masonite panel. At the other end of the continuum is the completely covered canvas. In the middle at various positions on the continuum are watercolor and pastel, given their reliance on the substrate and their tendency to get muddy when over applied.

Here's a classic, The Dot and the Line: A Romance in Lower Mathematics.

Posted by Rounder Studio Stuff at 10:06 AM No comments:

Email ThisBlogThis!Share to TwitterShare to FacebookShare to Pinterest
Labels: Chicago art, drawing, Nancy Charak, The Dot and the Line 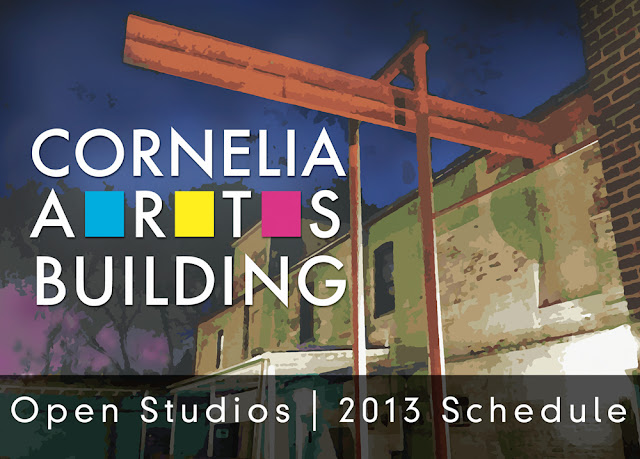 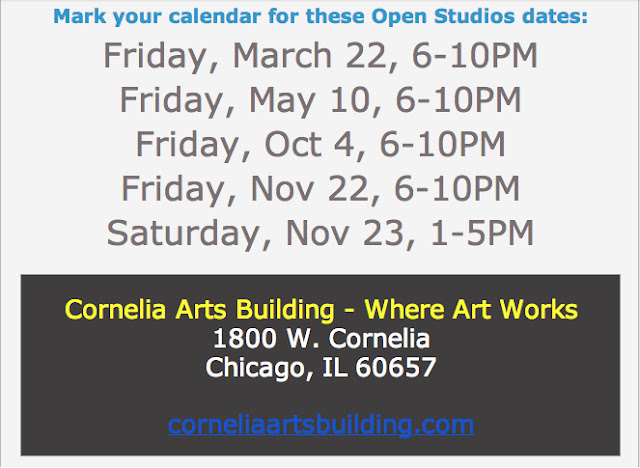 Original artwork from the studios of over 40 artists. Plus, live music, food trucks and guest artists!

FREE and open to the public. Please visit our website for more information: corneliaartsbuilding.com.

Posted by Rounder Studio Stuff at 11:46 AM No comments:

From the Field of Bosworth to the Sands of Timbuktu

The University of Leicester in England has announced that they have confirmed that the bones dug up from under a parking lot are indeed those of the hapless Richard III. Of course, this has brought up all kinds of delicious speculation and historical revisionism, particularly from those who think he was a much maligned king, especially via Shakespeare's history, exemplified by Laurence Olivier's almost cartoonish performance. Shakespeare clearly drew on historians who had fealty to Elizabeth I, a granddaughter of the winner at Bosworth, Henry of Lancaster. An example of how history is written by the winners, as well as by those who wish to flatter them.

Those of us who care about cultural and historical survival have been following the struggles in Mali and the ancient city of Timbuktu, where it was originally speculated that in addition to the destruction of the Sufi saints' tombs, the Ansar Dine would burn the ancient manuscripts. After all, there is much reason for concern; those who care watched in horror as the Taliban assaulted the Bamiyan Buddhas which had survived for 1,700 years. Good news, the majority of the ancient manuscripts are said to be safe.

"Decentralizing the documents, which range from academic treatises to commercial contracts, law books, and medical texts, kept them safe. After Tuareg rebel fighters entered Timbuktu on April 1, curators and collectors began to remove texts from the libraries and “distributed them around,” Cape Town University professor Shamil Jeppie said. The New Yorker reports that 50,000 manuscripts are housed in 32 family libraries that remain protected."

History is cruel. Elizabeth I's father, Henry VIII had a dispute with the Catholic Church. In the process of wresting power and, it must be said, money and influence from the Church of Rome, Henry destroyed monasteries all over England. Due to this destruction the bones of the only English King with the designation "The Great," Alfred, are missing. Also missing are those of Henry I to the same cause.

Posted by Rounder Studio Stuff at 11:39 AM No comments:

Poet of the Day: Langston Hughes

Today is the anniversary of the birth of Langston Hughes, 1902.

CLICK HERE FOR OPEN YALE LECTURE ON THE POEM.

The Negro Speaks of Rivers

My soul has grown deep like the rivers.
I bathed in the Euphrates when dawns were young.
I built my hut near the Congo and it lulled me to sleep.
I looked upon the Nile and raised the pyramids above it.
I heard the singing of the Mississippi when Abe Lincoln
went down to New Orleans, and I've seen its muddy
bosom turn all golden in the sunset.

My soul has grown deep like the rivers.
Posted by Rounder Studio Stuff at 11:09 AM No comments: