To quote artist Joyce Owens: "Drawing these figures is like playing scales for musicians...keeps your chops."


These drawings are among 19 studies for Nighthawks, brought together for the first time, in a revelatory show now at the Whitney. “Hopper Drawing” deploys 200 Hopper drawings—part of a trove of 2,500 bequeathed by the artist’s widow, Josephine—to showcase the role of drawing throughout his career, from his life drawing classes at the New York School of Art in the early 1900s, to his travels in Europe and Paris from 1906 to 1910, to the studies he made at the Whitney Studio Club and beyond. (After closing at the Whitney on October 6, the show will travel to the Dallas Museum of Art and the Walker Art Center.)


Then see the actual painting at the Art Institute of Chicago.

Posted by Rounder Studio Stuff at 11:00 AM No comments:

Thanks to Ahavani Mullen, and to Shelley Gilchrist. And don't miss looking at the work of Kathleen Waterloo. You can find them at their website, FusedChicago Midwest.

Posted by Rounder Studio Stuff at 7:41 AM No comments:

From The New York Times:


PARIS — To Olga Dogaru, a lifelong resident of the tiny Romanian village of Carcaliu, the strangely beautiful artworks her son had brought home in a suitcase four months earlier had become a curse.

But if the paintings and drawings no longer existed, Radu Dogaru, her son, could be free from prosecution, she reasoned. So Mrs. Dogaru told the police that on a freezing night in February, she placed all seven works — which included Monet’s 1901 “Waterloo Bridge, London”; Gauguin’s 1898 “Girl in Front of Open Window”; and Picasso’s 1971 “Harlequin Head” — in a wood-burning stove used to heat saunas and incinerated them.

The forensic experts have found traces of "pigments included cinnabar, chromium green and lazurite — a blue-green copper compound — as well as tin-lead yellow, which artists stopped using after the 19th century because of toxicity. In addition, copper nails and tacks made by blacksmiths before the Industrial Revolution and used to tack canvas down were found in the debris. Such items would be nearly impossible to fake."

Priceless beyond imagining. No means of restoration other than sighing at the pixels.

The New York Times Slideshow of the images.

Posted by Rounder Studio Stuff at 5:02 AM No comments:

Six Romanians have been charged with the theft, and now detectives in their home country have found the charred remains of what looks like the paintings in an oven.
They were allegedly put there by Olga Dogaru who said she torched the artwork to "destroy the evidence" following her son's arrest in January.

Here's the original post from Bloomberg with images of the paintings that were presumably destroyed by the thief's mother.

Thieves stole seven paintings, including works by Pablo Picasso and Claude Monet, from the Kunsthal museum in the Dutch city of Rotterdam earlier today, police said.

“Preliminary findings show the burglary was well- prepared,” the Rotterdam-Rijnmond police district said in a statement on its website. It said the theft took place at about 3 a.m. local time. Detectives are talking to possible witnesses and scrutinizing camera images, the police said.

Posted by Rounder Studio Stuff at 10:45 AM No comments:

June 16, 2013
Amsterdam Diary: "Van Gogh at Work" rebukes myth of solitary impulsive genius with the story of a disciplined artist influenced by his peers.

At the Van Gogh Museum, from an exhibit on Van Gogh's Studio Practice we learn that Van Gogh studied Delacroix, Signac, Seurat, Gauguin and Bernard. Maybe now we can grok that he was a disciplined practitioner of art practice, that his output came from hard work and hard study, not merely from mythological tortured inspiration.

"Van Gogh at Work" puts the evolving styles of the artist into context as Vincent learned how to use materials and developed his style, evolving from an academic painter to a modern artist beginning at the age of 27:
In the 19th century, artists normally learned their trade by taking lessons at an academy or in a well-known artist's studio. They were taught by the traditional method, drawing from plaster copies of ancient sculptures and from nude models. Van Gogh, too, took lessons of this kind, although never for very long: no more than eight months in total. In 1880 he studied at the academy in Brussels and in 1881 in Anton Mauve's studio in the Hague; in 1885 at the academy in Antwerp, and in 1886 in the atelier of the painter Fernand Carmon in Paris. In the end, Van Gogh learned his craft mainly by spending countless hours at home copying drawings and paintings. He chose subjects of all kinds, from plaster models of the kind used at the art academy to a worn-out pair of shoes.

The exhibit is a result of the research project 'Van Gogh's Studio Practice', initiated in 2005 by the Van Gogh Museum, the Cultural Heritage Agency of the Netherlands and Shell Netherlands.
Posted by Rounder Studio Stuff at 6:11 AM No comments:

Imagine the comfort and refreshment of finding water after days of dusty travel. A reliable waterhole hidden at the base of a sandstone bluff made El Morro (the headland) a popular campsite for hundreds of years. Here, Ancestral Puebloans, Spanish and American travelers carved over 2,000 signatures, dates, messages, and petroglyphs. We invite you to make El Morro a stopping point on your travels.

Slim and I came here, last April, to see this astonishing watering hole situated in the midst of an arid, but beautiful landscape. Indians, Spaniards, mountain men, American soldiers all left their marks in the soft rock. This all poses the question of what is the boundary between defacing sacred objects and historical artifact. When Napoleon's soldiers were in Egypt in 1798, they not only scratched their names into the ancient monuments, they did so over Roman graffiti. 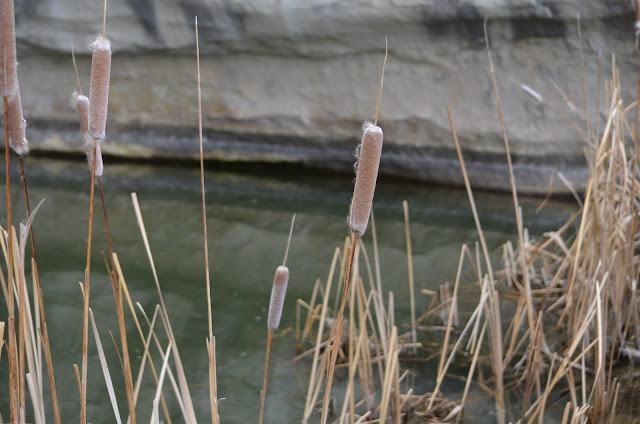 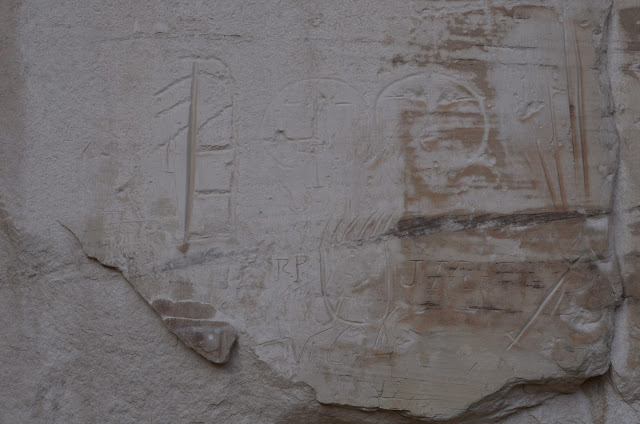 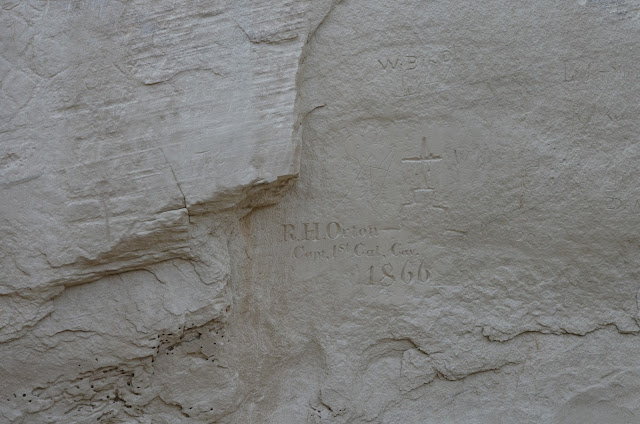 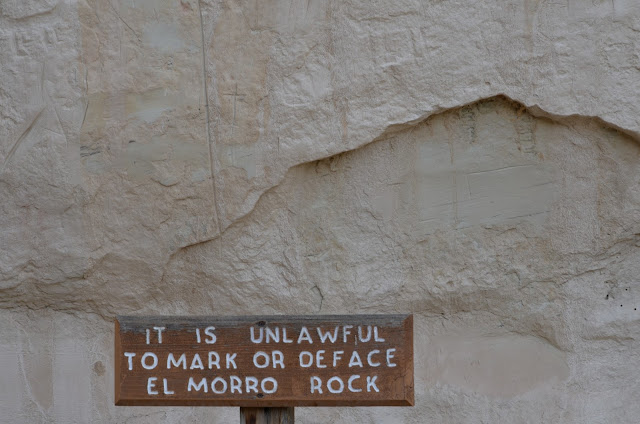 The National Park Service is concerned about saving the graffiti but no contemporaneous or new inscriptions are allowed. Again I quote from their website about their concerns and efforts to preserve them from natural erosion.

El Morro is an important link to the past and natural deterioration of that link is a concern. Even though the inscriptions on Inscription Rock are very old, dating back to the 1600's, and the petroglyphs are anywhere from 700-1000 years old, they will not be here forever.

The processes of erosion, weathering and plant growth all take their toll. Sand grains wear away, rocks crumble and fall, and lichens and clay deposits cover the historic carvings. Important inscriptions become illegible or fall from the face of the bluff. A part of the evidence of our heritage is crumbling away.

The National Park Service hopes to preserve this evidence for as long as possible by assessing, monitoring and treating the inscriptions and the rocks in which they are carved. Dowload our Monitoring and Preservation brochure (608k PDF file) to learn more about the projects underway at El Morro National Monument.
Posted by Rounder Studio Stuff at 11:55 AM No comments:

Yesterday Morning at 6:44 am in the Catalina Foothills 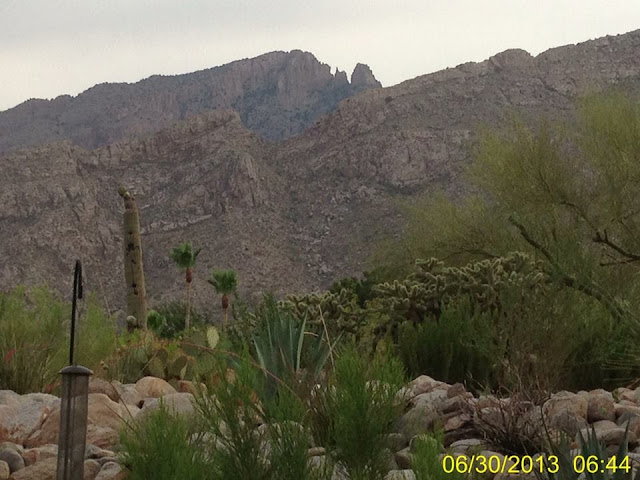 This is a view of The Finger looking north from Slim's house.
Posted by Rounder Studio Stuff at 6:51 AM No comments: