Poet, activist Margaret Rozga has published a new book, Justice Feedom Herbs. Quite a sweet surprise to see my name mentioned in the acknowledgements. Thank you Margaret. We collaborated several years ago for the Poetic Dialogue Project under the auspices of the ARC Gallery of Chicago at the H. F. Johnson Gallery of Carthage College. 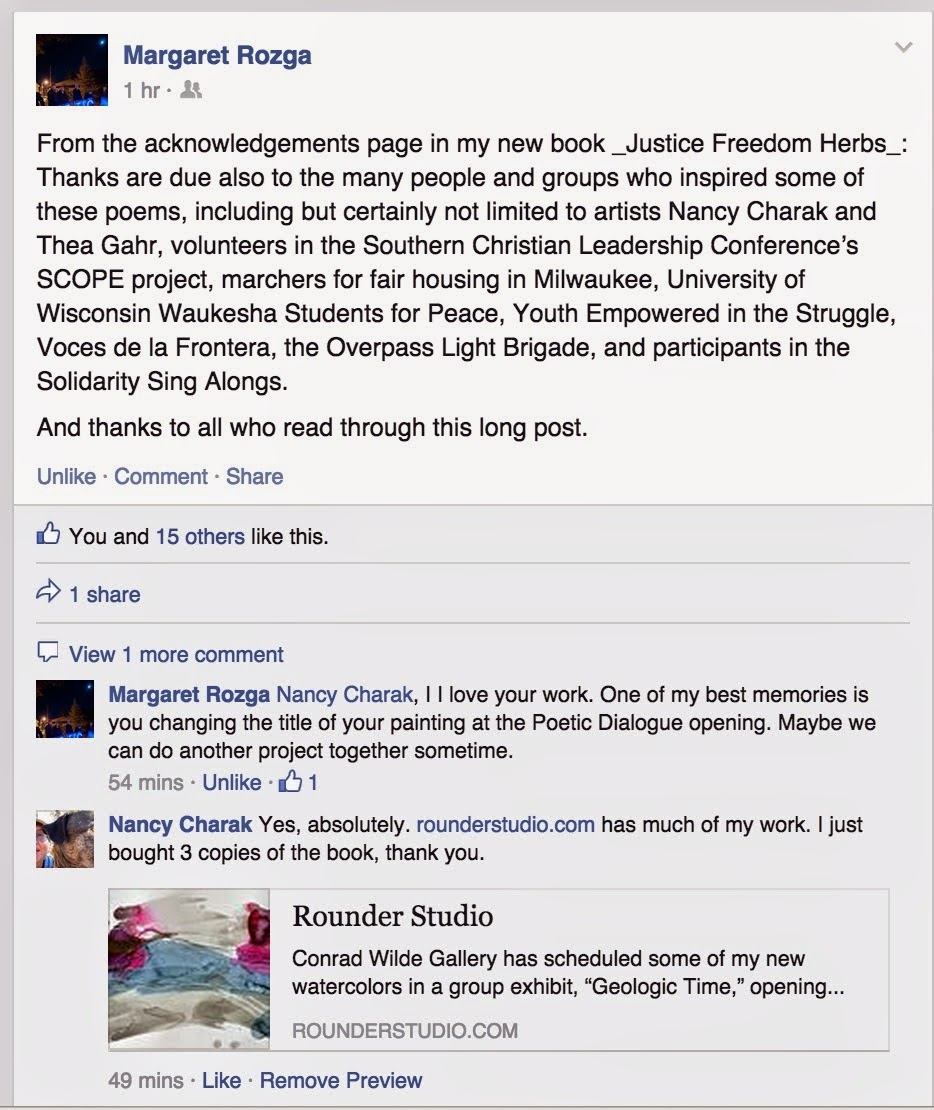 Posted by Rounder Studio Stuff at 12:17 PM No comments:

You can see my artwork at Space Gallery, featured here in Denver Westworld Blogs, No. 2 on the list! Please come on by, it's at 4th Avenue and Santa Fe, Denver. 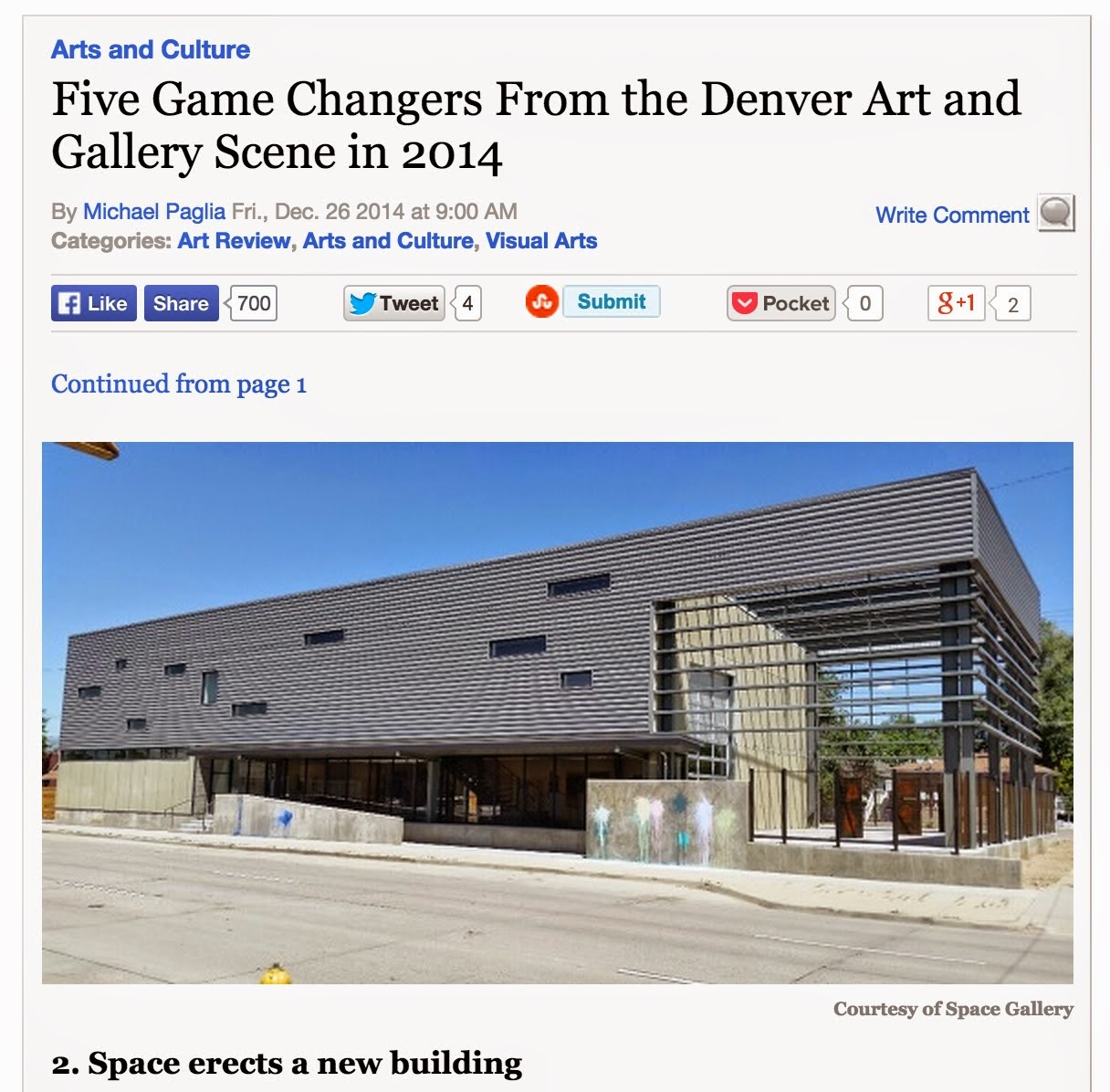 "If Michael Burnett and Melissa Snow wanted to be taken seriously in the art world, they sure picked the right path: building a custom-designed building for their Space Gallery that looks for all the world like a small museum. The two-story structure rises on the corner of 4th Avenue and Santa Fe Drive. Designed by architect Owen Beard's firm, Solid Design, it is an absolute show stopper. Beard took a prefabricated building kit and re-imagined it as a sleek neo-modernist structure assembling the parts in different ways than intended. The venue includes a large main exhibition space, with a fenced-in outdoor sculpture garden adjacent to it. There's a grand-staircase and at the top, a wrap-around mezzanine gallery that overlooks the main room. The interior has just the right amount of drama to attract events--in fact, you could say that it's just about the best place in town to hold a pot-friendly same-sex wedding -- or even a liquor-friendly regular one. The current exhibit, The 12 Inches of Christmas, features small works by artists in the gallery's stable."
Posted by Rounder Studio Stuff at 11:54 AM No comments:

From the Harvard Museums Website
"This new presentation of Mark Rothko’s Harvard Murals features innovative, noninvasive digital projection as a conservation approach. The exhibition returns this mural series to public view and scholarship while also encouraging study and debate of the technology." 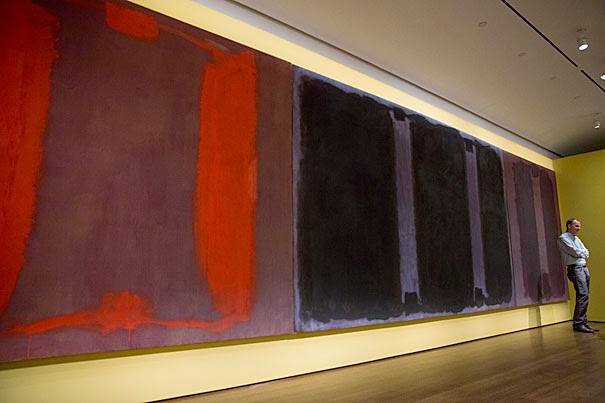 "The technique employs a camera-projector system that includes custom-made software developed and applied by a team of art historians, conservation scientists, conservators, and scientists at the Harvard Art Museums and the MIT Media Lab. The digital projection technology restores the appearance of the murals’ original rich colors, which had faded while on display in the 1960s and ’70s in a penthouse dining room of Harvard University’s Holyoke Center (now the Richard A. and Susan F. Smith Campus Center), the space for which they were commissioned. Deemed unsuitable for exhibition, the murals entered storage in 1979 and since then have rarely been seen by the public." 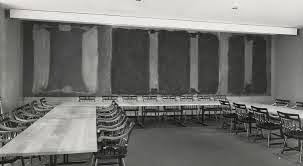 I am truly grateful that the conservationists have wisely decided to leave the paintings alone. I am however, slightly uneasy at the possibilities that going forward the solution to paints fading is to simply fire up the pixels. It is deeply disturbing that the paintings were carelessly exposed to degenerative lighting conditions in the first place. But, it is good to note that the conservationists understood that Rothko's somewhat unconventional technique of painting with pigment loaded into the rabbit skin sizing without a separating layer of varnish could not be touched.

Here's from the NYTimes, August 1988
"Although a quarter-century has passed since they were first displayed, the five murals Mark Rothko painted for Harvard remain a source of controversy and embarrassment at the university. Fingers have been pointed toward various factions in the Harvard administration and at the artist himself, but no matter where blame rests, the reasons for distress can clearly be seen: What Rothko donated to the university to cover the walls of a penthouse dining room intended for ceremonial functions has been irreparably damaged by overexposure to the sun. Lush crimson-toned paintings have faded to a variety of unrelated blue colors; they cannot be restored, The murals, which have also been ripped, spattered with food and marred by graffiti, were retired to storage nine years ago from the room in the Holyoke Center where they had been hung, their battered canvases a lingering humiliation to the university that had requested them. Plans to clean the panels and to install three of them in the school's Arthur M. Sackler Museum got far enough that the building's architect, James Stirling, included a niche for them in his plan."

I highlight the additional crimes committed to these paintings over and above damage from exposure to light, ". . .ripped, spattered with food. . .marred by graffiti."

http://www.theguardian.com/artanddesign/2008/sep/14/art1, interview detailing Kate Rothko Prizel's work to save the legacy and the paintings.
Posted by Rounder Studio Stuff at 4:16 PM No comments: