Thanks to my super webguru, Emily Rapport, herself an amazing artist, a new gallery of paintings and drawings are up on my website from the Black Series. Over the past several years, I have explored the notion of working from the black out. We so much traditionally work with a white substrate, and then cover it up with marks of paint and drawing. In the Black Series I make a stab at pulling something out, rather than covering it.

Posted by Rounder Studio Stuff at 7:12 PM No comments:

First of all, a reminder that Rounder Studio is now in Tucson, as I have pulled an Agnes Martin and decamped to the southwest. You can see some photos of my walks with my dog Samwise Gamgee at my Facebook IOS album.

In Chicago, good things. The ARC is having its 40th Anniversary show, they are the second oldest continuing artist cooperative in the country. I won't be there but my painting Realization 5216 will. 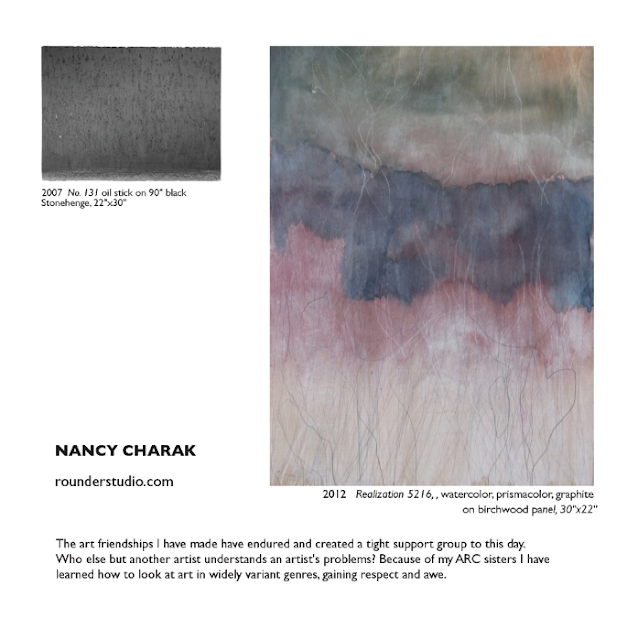 You can see my work and the work of other fine artists (including Agnes Martin) at The Nevica Project, under the good auspices of Jayson Lawfer, in the Ravenswood neighborhood in Chicago, just a short 2-block walk from my former studio at the Cornelia Arts Building. Note that Jayson Lawfer is encouraging all of you who are attending the Art Expo in Chicago (September 19 – 22, 2013) this weekend to get to the showroom at

And then, the Cornelia Arts Building is having an Open Studio, Friday, October 4th from 6--10pm, you should go. My studio mates and friends will be there, Randi Russo, Scott Simons, Emily Roynesdal, Doug Birkenheuer, Doug Frohman, Kevin Swallow, Jason Messinger, Darrell Roberts, over 40 artists!
Posted by Rounder Studio Stuff at 11:17 AM No comments:

Voyager 1 Has Left the Solar System

It's official. Voyager 1 has left the solar system. NASA announced it this afternoon. NASA's Voyager 1 spacecraft officially is the first human-made object to venture into interstellar space. The 36-year-old probe is about 12 billion miles (19 billion kilometers) from our sun. It doesn't change a thing here on Earth, but it's still a BFD.

Posted by Rounder Studio Stuff at 3:46 PM No comments:

Artist of the Day: Emily Rapport

Emily Rapport, artist, is having an open studio, here's her artist website. I picked "Damen Sunset" because I truly love Emily's feel for watercolor and because this is a scene that fills me with nostalgia for my hometown and for the Brown Line, one of the mellowest transit rides in the world.

Ravenswood Open Studio
One Day Only…

Featuring all new oil paintings by me PLUS work by studio mates Marion Kryczka, Amavong Panya and special guest artist Leo Kogan. Location is 4541 N. Ravenswood at Wilson, #403. Older works will be available and priced to sell. RSVP to our Facebook event here.
Free to enjoy, close to Ravenswood Metra, Damen Brown Line and plenty of free parking.

And in the shameless promotion department, Emily Rapport is my guru, my webmeister, she does my website, rounderstudio.com and here's her webwork website which is eatpaintstudio.com.
Posted by Rounder Studio Stuff at 9:16 AM No comments: